The 2018 Anti-Money Laundering and Financial Crime conference was a great success. 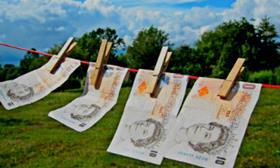 Some of you may have attended the excellent Anti-Money Laundering and Financial Crime conference hosted by the Law Society on 21 November in London’s Bishopsgate.

With over 450 delegates on the day, it’s clear that members are still grappling with all of the changes in this area introduced in the past year.

The conference kicked off with an introduction by the current chair of the Money Laundering Task Force, Amasis Saba, who introduced us to an app called Slido, which allowed polling of the attendees making for interactive participation throughout the rest of the day.

The Right Honourable Ben Wallace MP, Secretary of State for Security and Economic Crime, made the keynote speech asserting that he sees security and prosperity go hand-in-hand and that, ‘a post-Brexit UK must maintain already high standards to prevent dirty money coming into the country’.

To that end the government have introduced the National Economic Crime Centre (NECC) , which includes officers from the NCA, HM Revenue and Customs, the City of London Police, the Serious Fraud Office, the Financial Conduct Authority, the Crown Prosecution Service and the Home Office.

He said the partnership will drive how UK law enforcement tasks and co-ordinates activity - ensuring the right agencies use the right tools and tactics to get the best results and it will promote the use of new powers such as unexplained wealth orders and account freezing orders to tackle illicit finance across all threat types.

In the next plenary Crispin Passmore gave his last public speaking engagement for the SRA and took us through the SRA’s priorities including their:

In 2019, according to the SRA’s Thematic Review the focus will be on high end conveyancing, particularly prime property and cash transactions.

This was followed by a series of practical breakout sessions covering the following:

In the final plenary before lunch, we had a highly illuminating speaker in DS Azad of the Metropolitan Police Cyber Crime Unit who took us through the money laundering risks of receiving payments in cryptocurrencies.

The afternoon kicked off with the always entertaining Jonathan Fisher, QC who updated us on several significant cases dealing with breaches to both the SRA Handbook and Money Laundering Regulations. Proof, if it were needed, that enforcement actions are getting tougher.

It was a lot to take in but the Law Society Policy Team and the AML Task Force are working hard to mitigate any additional burden on solicitors.

We will keep you up-to-date through our website and in the newsletter and you can access further AML information and resources online.