Practitioners acting for purchasers in commercial property transactions face a challenge around finding out if the seller is insolvent. Amanda Eilledge explains the situation and proposes a potentially controversial solution

The principal risk in dealing with an insolvent property owner is that the transaction entered into is either void or liable to be set aside by court order. While all dispositions of property are potentially at risk, the key example is that of a simple sale. The greatest risk occurs where the counterparty is paying below market value for the property, or is connected to the seller (such as a director or relative). The issues that arise depend on the timing of the sale in relation to the liquidation or bankruptcy. It is useful to look at this problem in three distinct phases:

In this article, I focus on sales of registered land during the twilight period. Given the risks that are involved, should conveyancers consider making further enquiries prior to exchange or completion of the purchase?

Sales during the twilight period

In corporate insolvency, a company most commonly enters insolvent liquidation after a creditor of the company presents a winding-up petition. There will be a court hearing. If the court is satisfied that the company is insolvent, a winding-up order is made (see section 124 of the Insolvency Act 1986 (IA 1986)). In bankruptcy, a bankruptcy order may be made in two circumstances:

There is an inevitable delay between the presentation of the petition and the making of the order. It is quite common for either the directors of a company or an individual to try to sell assets and divert the proceeds of sale during this twilight period.

Any sale of assets during the twilight period is void unless the court orders otherwise (see section 127(1) of the IA 1986 (corporate) and section 284(1) (bankruptcy)).

Acting for a purchaser

Let’s assume you act for the purchaser. What do you do if you discover that, between exchange and completion, a petition has been presented against the seller? Or worse still, what if you discover this after completion, and the liquidator or trustee in bankruptcy comes knocking on your client’s door alleging that the sale is invalid?

Second, you can apply for a validation order, preferably before the sale is completed (an application can be made after the sale, but that is more difficult). The procedure is set out in paragraphs 9.11 and 12.8 of the new Ministry of Justice Practice Direction – Insolvency Proceedings. Whether or not the debtor is trading or carrying on business, where the application involves a disposition of property, the court will need to be satisfied that any proposed disposal will be at a proper value. Accordingly, an independent valuation should be obtained and exhibited as evidence. The court will need to be satisfied by credible evidence that the debtor is solvent and able to pay their debts as they fall due, or that a particular transaction or series of transactions in respect of which the order is sought will be beneficial to or will not prejudice the interests of all the unsecured creditors as a class (see Denney v John Hudson & Co Ltd [1992] BCC 503 (CA) and Re Fairway Graphics Ltd [1991] BCLC 468).

Third, ‘property’ in this context means beneficially owned property. If unconditional contracts of sale have been exchanged prior to the presentation of a petition, and there is no doubt that the contract is specifically enforceable, it can be argued that the company no longer beneficially owns the property, and thus completion may take place without seeking a validation order. Unless specific performance would be ordered and there is no possible defence, it would be prudent to seek such an order in any event (see Re French’s (Wine Bar) Ltd [1987] BCLC 499).

How do you know that a petition has been presented?

Following the presentation of a bankruptcy petition or application, the court or adjudicator must inform the Land Charges Department, which will register the relevant particulars in the pending actions register (section 5(1)(b)-(c) of the Land Charges Act 1972 (LCA 1972), and rules 10.13 and 10.37 of the Insolvency (England and Wales) Rules 2016). For a person dealing with unregistered land, such registration is deemed to be actual notice of the petition / application to all persons and for all purposes relating to the land affected (section 198 of the Law of Property Act 1925 (LPA 1925)). As far as registered land is concerned, this registration also triggers the entry of a bankruptcy notice on the registered title (section 86(2) of the Land Registration Act 2002).

The position in corporate insolvency is quite different. There is no equivalent registration procedure for companies: indeed, there is no mechanism at all for registering the presentation of a petition or a winding-up order. A search of the London Gazette is insufficient, as it will not reveal petitions presented but not yet advertised. Similarly, an online search at Companies House will not inform the searcher that a petition has been presented, and there is also an inevitable delay between the making of a winding-up order or the passing of a resolution and its registration at Companies House.

Does conveyancing practice need to change?

Practitioners acting for purchasers in commercial property transactions face a challenge around finding out if a petition has been presented. I would recommend that they procure a search of the central registry of winding-up petitions (which covers the High Court and county court) just prior to completion. I would suggest that any failure to carry out such a search is probably negligent.

It costs nothing to advise a client to pay for an additional search and to explain why, so that the client is on notice if there is later a problem

As part of my research for the insolvency chapter of a new book published by Law Society Publishing, Risk and Negligence in Property Transactions , edited by my colleague John de Waal QC, I have spoken to a wide range of conveyancing solicitors on reducing risk arising from presentation of petitions during the twilight period.

While many solicitors will seek to determine whether their client purchaser is paying market value for the property, few make enquiries regarding whether there is any connection between the parties. If the parties are connected, a liquidator or trustee is more likely to challenge whether the purchaser is entitled to rely upon section 284(4) of the IA 1986. At the very least, this would seem to be a matter which a solicitor would be well-advised to draw to their client’s attention at the beginning of the transaction, leaving the client who has such a connection to come back to seek further advice if they wish.

Not one of the solicitors I spoke to carries out either a bankruptcy or winding-up petition search prior to exchange, although such a search is recommended in the Conveyancing Handbook (25th edition at B10.5.6). Reasons cited included a reluctance to ask the client to pay for such searches as a matter of course; the inconvenience of so doing where a chain is involved; and the fact that, given the deposit will usually be held by the seller’s solicitor as stakeholder, the client does not really suffer any loss if the sale has to be aborted because it is discovered that a petition has been presented or an order made post-exchange.

The counter-arguments are that the cost of a search, or even several searches, is low. Searching where there is a chain prior to exchange is not very different from carrying out such searches in a chain prior to completion. It is also not the case that the client will suffer no loss. It is likely that they will have insured the property between exchange and completion; they may also face an argument that given the beneficial interest has passed, they are obliged to complete, and a failure to do so results in an argument over whether the deposit has been forfeited.

From a risk management perspective, it costs nothing to advise a client to pay for an additional search and to explain why, so that the client is on notice if there is later a problem.

Perhaps it is time for a proper debate about whether best practice should dictate that such searches are carried out as a matter of course pre-exchange? 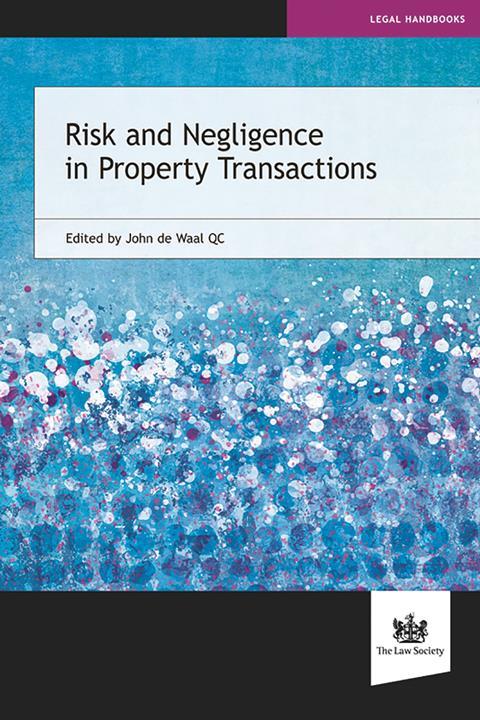