Michael Hodin, executive director of the Global Coalition on Aging, talks to Elizabeth Noone about the profound challenges we face as our population ages – and why he’s so positive about the future

We are, says Michael Hodin, in the midst of a profound demographic shift, one that will have an impact on society at least as profound as that of the industrial revolution. The aging of the population globally will affect virtually every aspect of the economy and society, and the consequences of failure to respond effectively could be catastrophic. But in spite of delivering such an alarming forecast, Hodin is surprisingly upbeat about the future.

There are three main factors driving this ‘mega-trend’. First is longevity: ‘We are now living until our 80s, 90s and beyond,’ says Hodin. ‘But this is just the transition phase: a baby born today is likely to reach 100. In fact, a girl born in the 1990s is likely to see three centuries – she would have been born in the 20th century, will live most of her life through the 21st century, and will very likely see the 22nd century.’

Closely related to this is what Hodin refers to as the aging of ‘the baby boom bulge’. Baby boomers – that is, those born between 1946 and 1964 – account for 24%of the British population, and the elder end of this demographic group has already hit the traditional retirement age of 65. ‘By By 2020, there’ll be a billion people on the planet over 60 years old, and for the first time in history, there’ll be more people over 60 than under 15. So it’s not just longevity – the proportion of old to young in society is having the most impact,’ explains Hodin. Which brings us to the third, and perhaps most pertinent, driving force of the population shift: low birth rates.

‘Low birth rates are near perfectly correlated with modernisation – and the women’s movement is not an insignificant part of this,’ Hodin remarks. Women are having fewer children, and a growing number are not having children at all. Some of the ‘oldest societies’ as a proportion of old to young are Japan, South Korea, Italy, and Germany. In fact, Germany’s fertility rate is now the lowest in the world, having fallen lower than that of Japan for the first time. Total fertility rates – the number of children per woman – of 2.1 are needed for a population to replace itself. Germany’s fertility rate is around 1.3. The UK’s is currently approximately 1.85. ‘We are depopulating,’ states Hodin simply. 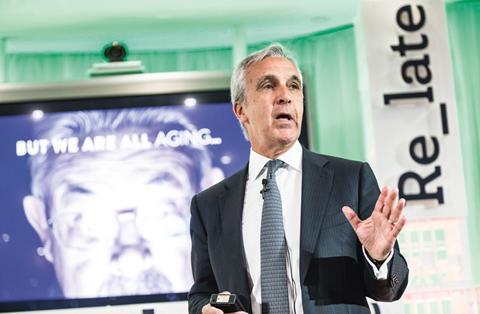 This population shift will have an enormous impact on society as we know it, particularly on 20th century creations such as the NHS and state pensions: when pensions were introduced in the early 1900s, there were 22 people of working age in Britain for every retired person. In 2024, there will be fewer than three. According to government projections, public spending on the basic state pension will soar from £66bn in 2015/16 to £276bn in 2060/61. ‘Given these demographic trends, public policies and institutions from the last century are simply unsustainable in the 21st century,’ Hodin warns. ‘They were created at a time when there was a much larger population working and contributing to the money that supports the NHS, and when those proportions shift, you eventually go bankrupt. The question for all of us is how to square 21st century aging populations with misaligned 20th century policies.’

The canary in the coal mine

Economic stagnation is a further, and often overlooked, consequence of the aging population and retaining old models of retirement. ‘Japan is the canary in the coal mine – if you want to know what a bad future looks like, look at Japan,’ warns Hodin. ‘20 years ago, Japan was the future. And then there was an economic malaise. And we’ve been waiting for a resurgence in Japan for two decades now. By 2020, the Japanese will sell more adult diapers than baby diapers. In the next few years, close to 40% of the population will be over 60.’ And yet Japan has failed to formulate a basic strategy around aging.

According to Hodin, our government’s attempts to modify the system by encouraging better economic planning among young people and raising the retirement age don’t go far enough: ‘The demographic data is so dramatic that the very minimal and incremental changes that are being contemplated by government are not going to have the necessary impact.’ What is needed, he says, is a revolution: ‘a reimagining’ of society to reinvent both public policy and the very institutions of society. While incentivising financial planning among the young is one of Hodin’s key recommendations for averting disaster, ‘you also need to look at the other end, and enable and encourage a silver economy’. Therein lies the crux of the thinking of Hodin and the Global Coalition on Aging: the aging population may pose a significant societal challenge, but it is also a major opportunity for economic growth.

‘So-called seniors are an untapped source of economic growth, and not just a segment that needs protection,’ explains Hodin. A common objection to encouraging the older population to keep working is that it would create further youth unemployment, but Hodin believes that the women’s movement serves to disprove this claim. ‘Women didn’t “take” jobs; they added jobs and helped drive and sustain growth. We face a very similar situation today. Older workers are not going to divide the economic pie into ever-smaller pieces; they are going to grow the pie by adding to our ability to produce.’

‘The question is how to change the culture, policies and institutions in order to re-imagine and transform what used to be considered old age into an active and engaged demographic,’ continues Hodin. ‘The first step would be to get rid of traditional notions of “retirement”, and then encourage or enable people to work longer, but in different, flexible ways. Give people what they want. More people would like to work longer; data indicates that people are way ahead of governments and leaders on this. Give companies the flexibility to keep on or hire people past “retirement age”, maybe through tax incentives. And provide incentives for what we call ‘silver entrepreneurs’. According to US research, that’s the best deal you can make in terms of repayment of loans.’ Recent UK research has indicated that businesses founded by over-50s had a 70% chance of lasting five years, compared with 28% for younger entrepreneurs. ‘If you have more and more people over 65 who are actively working and engaged, that will completely change the equation of how much money is going into government, and how much it can afford to pay out to those who need it.’

It’s also important to recognise the second aspect of the silver economy – as well as potential producers, the older population are consumers. ‘In the US, which is similar to Europe in the aging of its population, by 2017, 70% of disposable income will be held by people aged 60 and over. So if you’re any business, large or small, and you don’t have a strategy to develop products and services for, and market to, the ‘elderly population’, you’re crazy. That’s where the market growth is. That doesn’t mean you have to ignore people in their 20s, 30s or 40s, but it would be like a corporation in the mid-1990s or the early part of the 21st century looking at the global market place and ignoring China or India, or overlooking eastern Europe as communism was collapsing.’

Hodin says that, increasingly, companies are thinking strategically with respect to demographics, and predicts that a range of age groups will be involved in their marketing strategies in the future. ‘Whether it’s a fashion company or financial services, if you have a couple of 63- or 73-year-olds on your marketing or innovation team, then you have some interesting insights to add to the more traditional market research.’

The cloud on the horizon

But there’s a catch: a thriving silver economy is reliant upon a healthy older population. Thanks to huge advances in medicine and technology, we are healthier than previous generations, but it’s imperative that we tackle aging diseases. Hodin believes that this is the final piece of the solution to avert disaster: ‘We need to spend the money today to find the solution to a couple of health problems that will otherwise bankrupt us, and Alzheimer’s is the first.’

According to the Alzheimer’s Society, dementia is one of the main causes of disability later in life, ahead of cancer, cardiovascular disease and stroke, and yet, the UK government invests eight times less in dementia research than cancer research. Alzheimer’s disease is the most common type of dementia, affecting 62% of those diagnosed. And as the baby boom bulge reaches old age, the number of Alzheimer’s suffers will increase; the consequences for the health system could be catastrophic. Hodin uses the fight against HIV/Aids as a model to follow: ‘In 20 short years, it’s gone from being a completely new and fatal disease, to becoming a manageable illness. And that only happened because of a political commitment that led to real money being dedicated to the cause.’

In spite of the significant challenges we face, Hodin is convinced of our eventual success. ‘We should have people working and staying active as long as they can, and in ways that are reinvented and reimagined for the 21st century. Public policy and institutions should be reinvented to support that. I think there are pathways forward, and some very profound changes that need to take place, but I’m very optimistic that they’ll happen, because we always get there – they just take a bit of time.’