This appeal ‘raise[d] fundamental questions as to the nature of the Court of Protection’s jurisdiction and, in particular, the approach it should adopt when a care provider is unwilling to provide, or to fund, the care sought, whether by the patient or, as here, by the patient’s family.’ Annabel Lee from 39 Essex Chambers discusses the issues the appeal raises.

At the final hearing of an application for declarations as to where a young man (P) should live (and receive education and care), and for regulation of his contact with his parents and other family members, the relevant funding body, ACCG, had made it clear that it was not prepared to fund contact between P and his family at the parents’ home. ACCG therefore submitted that this was not an option for the court to consider when making best interests decisions. Counsel for the parents submitted that the court should embark upon a trial in relation to home contact (and to the delivery of personal care by P’s mother).

A jurisdictional issue arose as to the precise scope of the Court of Protection’s (CoP) powers. Mrs Justice King held that the CoP was – in essence – bound to choose between the options that were actually available. The CoP was not an appropriate forum in which to embark upon an inquiry designed to create a platform or springboard for possible future public law proceedings in the Administrative Court. 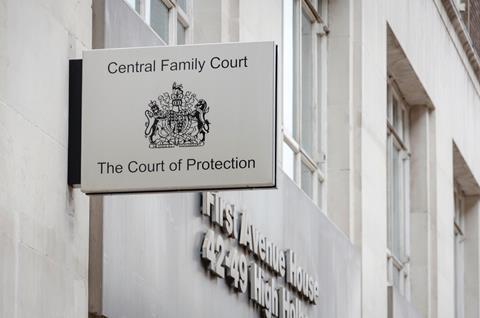 In the Court of Appeal (CA) ([2015] EWCA Civ 411), Sir James Munby P, president of the CoP, had no hesitation in concluding that Mrs Justice King was correct, essentially for the reasons that she had given.

Why it is important?

As the president noted, giving the lead judgment of the CA, this appeal ‘raise[d] fundamental questions as to the nature of the Court of Protection’s jurisdiction and, in particular, the approach it should adopt when a care provider is unwilling to provide, or to fund, the care sought, whether by the patient or, as here, by the patient’s family’.

The CA also took the opportunity to give guidance as to conduct of welfare proceedings before the CoP, and to clarify when decisions, rather than declarations, should be sought.

How does this fit into existing law and practice?

The president reiterated the importance of the need identified by Mr Justice Charles in A Local Authority v PB and P [2011] EWHC 502 (COP), [2011] COPLR Con Vol 166, paras 31-33, to identify, flag up and address, well before a personal welfare case comes on for hearing in the CoP, (i) any jurisdictional issues and the legal arguments relating to them and, more generally, (ii) the issues, the nature of each party’s case, the facts that need to be established and the evidence to be given. This identification had not taken place until a very late stage before Mrs Justice King and, as the president noted, ‘[s]teps need to be taken to ensure, as best can be, that there is no repetition of this kind of problem’.

In what ways does this affect practitioners?

The president made a number of wider observations as to the conduct of welfare proceedings before the CoP.

He noted that there was a striking contrast between the time some personal welfare cases in the CoP take to reach finality, and the six-month time limit applicable in care proceedings by virtue of section 32(1)(a)(ii) of the Children Act 1989.

The importance was reiterated of the need to identify and address any jurisdictional issues, facts that need to be established and the evidence that needs to be given, well before the case comes before the Court of Protection.

He emphasised the nature of the cultural revolution that had taken place in the Family Court with the introduction of the public law outline. He therefore endorsed the call made by Mr Justice Peter Jackson in Re A and B (Court of Protection: Delay and Costs) [2014] EWCOP 48 for the same disciplines to be introduced into the CoP as now apply in the family court, noting in this regard the work of the ad hoc Court of Protection Rules Committee.

The president deprecated, in particular, the quantity of material before the court, noting that it might be thought that PD 13B should be amended to bring it into line with PD 27A in the Family Court, providing that the bundle must not exceed one lever arch containing no more than 350 pages, unless a larger bundle has been specifically authorised by a judge.

He considered that ‘early consideration needs to be given’ to the amendment of rule 121 of the Court of Protection Rules 2007, to bring into line with section 13(6) of the Children and Families Act 2014, so as to limit expert evidence to that which is ‘necessary to assist the court to resolve the proceedings justly’.

The president’s observations as to case management are noteworthy for their trenchancy, but they are otherwise entirely consistent with a rising chorus of judicial observations that the time has come to get the CoP under control. Precisely how this is to be implemented in practice is a matter that will be exercising the ad hoc Rules Committee significantly over the coming few months.

What, if anything, should I be doing differently as a result?

In many ways, the CA’s judgment as to the jurisdiction of the CoP should have come as no surprise, reflecting as it did the application of a long line of authorities. However, this does not diminish its importance, or the clarity of mind that it then requires all those concerned with the Mental Capacity Act 2005 (MCA 2005) to bring to decision-making in relation to those who lack capacity in one or more domains related to their care arrangements. Indeed, the judgment is perhaps even more important for those concerned with the MCA outside the court arena, reinforcing as it does the need always to be clear what decision is being taken in relation to a person who may lack capacity in one or more domains. It is vitally important to remember that the MCA 2005 only provides that a best interests decision is taken where the individual would take, or participate in the taking of, a decision.

The president’s remarks are consistent with a rising chorus of judicial observations that the time has come to get the Court of Protection under control.

There has also been some debate during the course of oral argument as to the use of declaratory orders in the CoP. Whilst the president noted that this was not the occasion for any definite pronouncement, he made some observations. In particular, the inveterate use of orders in the form of declaratory relief might be thought to be, in part, anachronistic and inappropriate. The president reminded practitioners that the CoP has, in addition to the declaratory jurisdiction referred to in section 15 of the MCA 2005, the more extensive powers conferred by section 16.

Annabel LeeAnnabel Lee was a judicial assistant in the UK Supreme Court to Lord Clarke of Stone-cum-Ebony and Lord Carnwath of Notting Hill for the legal year 2013/14. She is a junior barrister at 39 Essex Street