Charles Holbech discusses some recent cases that provide useful guidance on the scope of trustees’ duties when faced with decisions as to whether to sell or retain land, incur expenditure on repairs, or take legal action

In Brudenell-Bruce v Moore [2014] EWHC 3679 (Ch), Mr Justice Newey set out a number of basic principles relating to the duties of trustees, with particular reference to land. 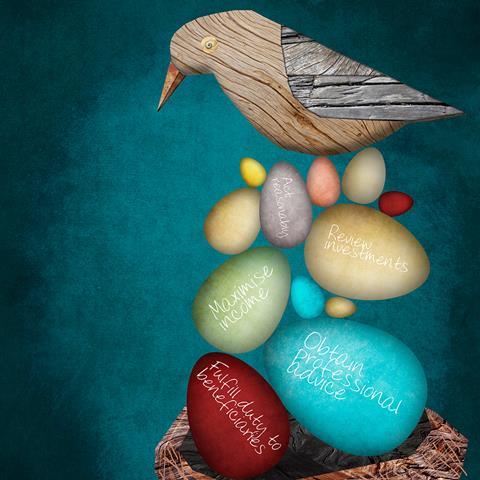 Liability of trustees: the law

The duty of a trustee is not absolute. There is no strict liability. Mr Justice Newey’s formulation of the law in Moore reflects this limitation. To paraphrase, he said that the fact that a trustee could have prevented a loss does not necessarily mean that they are liable for it. Nor will an error of judgment automatically result in liability in the case of an honest and reasonably competent trustee who acts with reasonable care. If trustees make a decision upon wholly wrong grounds, but it subsequently appears, from matters which they did not express or refer to, that there are in fact good and sufficient reasons for supporting their decision, then they would not incur any liability for having decided the matter upon erroneous grounds: the decision was right.

The duty of a trustee is not absolute. There is no strict liability. Mr Justice Newey’s formulation of the law in Moore reflects this limitation

This case involved the historic Savernake estate in Wiltshire, which was owned by a trust in which Lord Cardigan had a 49 per cent share. The principal asset of the estate was Tottenham House, which comprised the Grade I-listed house (which had been unoccupied since 2005 and was decaying fast) and a Grade II-listed stable block (which was extremely dilapidated). There were also about 4,000 acres of land, on which there were a number of buildings.

The trustees had little or no money. The estate’s losses were in excess of £200,000 in 2012-13, and there were borrowings of £1.8m. There were two trustees: a lay trustee (a barrister’s clerk) and a chartered accountant.

Lord Cardigan made a number of claims alleging breach of trust against the trustees, namely that they had allowed the stable block to fall into disrepair; failed to repair and re-let a property on the estate (Sturmy House); and allowed Lord Charles Brudenell-Bruce (the half-brother of Lord Cardigan, who was not a beneficiary of the trust) to live rent-free in a cottage on the estate.

In addition, Lord Cardigan claimed that the lay trustee had charged for their services at £150 per hour, in breach of their duty to act gratuitously. He also sought an order for the removal of the trustees.

The claim in respect of the stable block failed. The block was suffering from decay caused by damp penetration. It was let by the trustees on a long lease. In 2009, there was a partial collapse of the first-floor structure. Wiltshire County Council warned the trustees of the damage caused by water ingress, and recommended that the roof should be made watertight. However, the trustees, on advice, sought a purchaser who would completely gut and replace the interior. In August 2013, the trustees entered into a conditional contract for the sale of Tottenham House, including the stable block. However, subsequently, part of the roof collapsed, and there was further damage to the first floor.

Lord Cardigan’s claim was that the trustees should, as a minimum, have arranged for tarpaulins and plastic sheets to cover the vulnerable sections of the roof. It was alleged that, as a result of the trustees’ failure, the stable block had deteriorated much more than would otherwise have been the case. The additional costs of repair were estimated at between £2m and £2.6m.

The trustees were liable in respect of their failure to let Sturmy House, once they had repaired damage caused by a burst pipe. However, they were not liable for failure to repair the pipe before May 2012 when they obtained a loan of £1.8m. This, again, indicates that lack of funds may provide a reasonable excuse for inaction.

The trustees could have re-let by April 2013. They were liable for 18 months of lost rent (£50,000). This illustrates the general principle that trustees are under a duty to seek to generate income from land comprised in the trust.

The trustees were liable for their failure to ask Lord Charles to pay a market rent for his occupation of the cottage and, if he did not do so, to take steps to evict him and re-let. Lord Charles was not a beneficiary of the trust. Lord Cardigan had made clear that he no longer consented to Lord Charles’ rent-free occupation.

Lord Cardigan made a claim that the lay trustee (Mr Moore) should repay the remuneration that he had charged for his services (£64,225, at £150 per hour). This claim succeeded. The office of a lay trustee is usually gratuitous. Although the court has power to authorise payment of remuneration retrospectively, that jurisdiction should only be exercised sparingly and in exceptional cases.

It was material that Mr Moore: had initially agreed to act gratuitously, and was aware by the time that he was appointed that his role would involve more work than he had previously been led to believe; did not tell Lord Cardigan that he had changed his mind before rendering invoices; was seeking to be paid for time spent on the affairs of the estate generally, rather than merely a specific project; and did not have particular qualifications or expertise of importance to the estate, even if he had devoted a considerable amount of time to his role as trustee, and put up with a considerable amount of unpleasantness from Lord Cardigan. It was also material that the estate was short of money.

Both trustees were in breach of trust (to repair and re-let Sturmy House, and in permitting rent-free occupation of the cottage). Mr Moore had also been in receipt of unauthorised remuneration. Although these breaches were not in themselves grounds for removal, Mr Moore was nonetheless to be removed as trustee following the sale of the estate, on the basis that the breakdown of his relationship with a major beneficiary (Lord Cardigan) was obstructing the administration of the trust. This was so even though the lion’s share of responsibility for the breakdown lay with Lord Cardigan.

The professional trustee (Mr Cotton) was not removed. He had considerable expertise in trust matters, and relations with Lord Cardigan were nothing like as bad as they were between Mr Moore and Lord Cardigan.

These cases emphasise the importance of trustees obtaining proper advice from reputable experts. If the advice is cogent, it is unlikely that they will have committed a breach of trust, even if the advice turns out to be wrong

In Jeffrey v Gretton [2011] WTLR 809, trustees of a valuable, but dilapidated, property, retained it unlet for six years, on the basis that one of the beneficiaries would, over time, pay for its refurbishment. The trustees were held to be in breach of their duty to review investments. They had, in effect, made a positive decision not to review, but to retain the property. This decision had fallen below the standard to be expected of a reasonable, prudent man of business, and they ought to have taken professional advice on the merits of their plan. That advice would probably have been to sell. However, the claimant beneficiaries could not establish that any loss had been caused by the failure to sell at an earlier date.

In summary, trustees must consider whether or not to sell trust assets, and take professional advice, if necessary.

Trustees are not necessarily obliged to sell on the open market after the fullest possible marketing exercise. They may pursue a targeted marketing strategy, confined to verified and previously interested parties, if they have received cogent professional advice that this is the better strategy.

In Cotton v Earl of Cardigan [2014] EWCA Civ 1312, the trustees of the Savernake estate proposed to sell Tottenham House to an unnamed buyer (X) for £11.25m, conditional upon obtaining the approval of the court. The court made an order approving the sale, in large part because there was no certainty of a better offer, and there was a need for a speedy and cost-effective sale to discharge liabilities.

Lord Cardigan appealed on the grounds that the price was inadequate, and was the result of an inadequate marketing exercise. There should, he claimed, have been a full and open international marketing campaign. There were unanswered questions as to how the selected bidders had been procured and selected. It was submitted that the court should be cautious of approving a momentous decision without a proper evidential basis. However, it was not disputed that there should be a sale.

The trustees had taken expert advice from a land agent (Knight Frank) on valuation, and from a surveyor on marketing strategy. The surveyor advised against an open market campaign on the basis that the selected bidder was known to be a special purchaser who would be attracted by competing in a narrow market field and, therefore, might be prepared to pay a premium price. Indeed, X’s offer was 32 per cent higher than Knight Frank’s valuation.

The Court of Appeal held the following.

Page [2012] EWHC 4390 (Ch) illustrates that trustees need not take steps to obtain the best possible price in any circumstances, but may accept an available offer, at least if they obtain the approval of the court.

The court authorised trustees to sell land at an offer price of £1.575m without planning permission. An application for permission would not have been justified, as it would be unreasonable to expect the trustees to engage in an expensive and speculative permission application where there was no clear prospect of increasing the property’s value. Expert advice had been obtained from a surveyor that it was reasonable to sell at the offer price. There was no cash to fund the planning permission application, and there was a pressing need to sell to pay arrears of income due to beneficiaries.

These cases emphasise the importance of trustees obtaining proper advice from reputable experts. If the advice is cogent, it is unlikely that they will have committed a breach of trust, even if the advice turns out to be wrong (see Pitt v Holt [2013] 2 AC 108).

Trustees are also not bound to go to any lengths to expose the trust property to the maximum number of potential buyers, or to take all conceivable steps to maximise value, for example, by applying for planning permission, if there are good reasons for not doing so (eg a lack of funds, the need for a quick sale).

The trustees may, where appropriate, be advised to accept an offer, conditional upon approval by the court. They would then need to apply to the court to approve their decision to sell. The court will give its approval if satisfied that the trustees have formed a view, in the light of the expert advice that they have received, which reasonable trustees could have formed. The court’s job is not to pick holes in the process adopted by the trustees, but to supervise their actions to ensure that they have taken reasonable steps to act in the best interests of the beneficiaries.