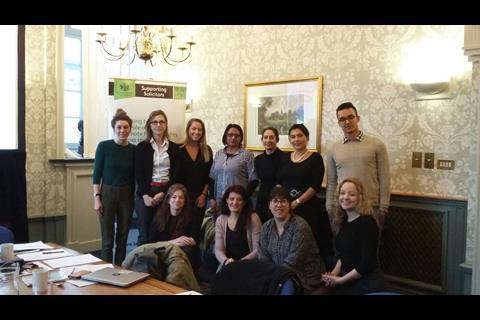 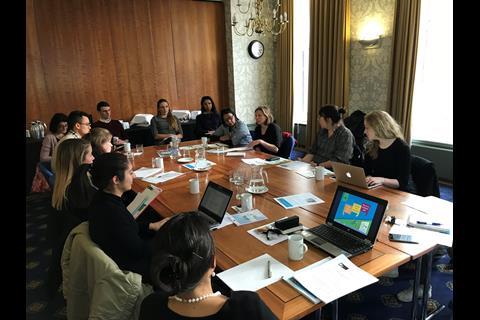 On 31 January 2018, Dina Meza, the celebrated independent journalist and human rights defender, founder of PEN-Honduras, recipient of the 2007 special Amnesty International UK prize for journalists at risk, and the 2014 Oxfam/Novib PEN International Freedom of Expression prize, visited the Law Society.

She was here to discuss the situation of the rule of law and human rights situation in Honduras, meeting with several stakeholders, including: Index on Censorship, PEN International, Christian Aid, amongst others. This is Dina’s second visit to the Law Society and we are grateful to Peace Brigades International UK for facilitating her visit.

An update on the situation in Honduras

During her presentation, Dina provided a concise analysis of the political situation in Honduras, since 1821 to the present day, explaining the root causes underpinning the current system of impunity, the severe poverty and inequality, and the challenges to the rule of law. She also expressed her dismay at the role of the current US Administration in recognising the re-election of Honduran President Juan Orlando Hernandez, despite widespread allegations of electoral fraud and calls from the Organisation of American States (OAS) and US Congress to hold a new vote. The Honduran elections took place on 26 November 2017 and this deeply flawed and disputed electoral vote has generated serious turmoil. Unfortunately, it has been reported that protesters from across the country have been met with violence and repression by Honduran security forces. HRDs and civil society organisations have been monitoring, documenting and publicly denouncing the human rights violations perpetrated in this context. She stated that this recognition would send out the wrong message and one that will continue to erode public confidence in the rule of law, increase social unrest, and perpetuate the lack of institutionality in Honduras. What is deeply troubling is that the executive will interpret this recognition as a free rein to carry on acting with impunity.

Dina also voiced her concerns about the lack of judicial independence and the repressive tactics used by certain organs of the state against the population, including: surveillance, intimidation, violence, torture and disappearances. She went on to say that the public prosecution service lacks effectiveness and they are constantly losing vital evidence, which in turn undermines due process. There is also a lack of political will to thoroughly implement protection measures granted to human rights defenders (HRDs) by the Inter-American Commission of Human Rights. In fact, what little protection this brave group of people are getting, they are suffering the inequity of having to subsidise it themselves.

Dina takes a very critical stance against the Honduran government and their role in human rights violations; the excessive use of force, violence, and intimidation against activists and HRDs. As an active campaigner, she highlighted and reported exhaustively the murder, in March 2016, of the high profile environmental activist and HRD Berta Cáceres in Honduras.

Dina’s organisation, PEN-Honduras, provides legal and educational support to “professionals at risk”, which includes journalists, social communicators and other activists. Unfortunately, her organisation only counts one part-time lawyer, who is unable to cope with the detentions of over 50 social activists.

Building on the experience of the Colombian Caravana, Dina called for the UK legal profession to undertake a similar mission to Honduras to assess the situation of the rule of law and to bring attention to the dire situation many lawyers, journalists and HRDs are operating under.

More than half of the population lives in poverty, the per capita income is one of the lowest in the region. There is a serious unequal distribution of wealth and high underemployment. Although the economy registered modest economic growth of 3.1% - 4.0% from 2010 to 2017, this has been insufficient to improve living standards for the nearly 65% of the population living in poverty.

On 31 January 2018, the World Justice Project launched its 9th edition of the Rule of Law Index. The Index measures how the rule of law is experienced and perceived by the public across the globe. It ranked Honduras 103 out of 113 countries assessed and 28 out of 30 in the regional rank. In terms of “Constraint on Government Powers”, which looks at how the powers of the government and its officials and agents are limited and held accountable under the law as well as non-governmental checks on the government’s power such as a free and independent press, Honduras is ranked 103 out of 113 countries.

Other indexes are very similar:

The situation of lawyers in Honduras

Approximately 18,000 lawyers are registered with the National Honduran Bar, which is relatively small considering that there are approximately 8 million people in Honduras.

Lawyers have not been spared from the violence in the country - practising law has become risky, with many lawyers identified with the case of their clients and often targeted in the exercise of their duties.

The National Commissioner of Human Rights (CONADEH in Spanish) registered 89 cases of violent deaths of lawyers between 2010 and March 2015. Among the victims, there were judges, magistrates, public prosecutors and counsellors. Of the 89 casualties, 81% were men and 19% were women. Most victims were executed inside their vehicles, sometimes in the company of their families, friends or clients. Others were killed in or near their homes or on public roads. Most of these assassinations were committed with firearms by so-called sicarios (hired killers). In 2016, CONADEH registered 16 more violent attacks against lawyers, including 13 killings.

Although Honduras enacted a law for the protection of HRDs, journalists and lawyers in 2015, many local activists report that this mechanism has suffered from conceptual and practical deficiencies in the proposal including lack of adequate resources and staffing.

The Office of the United Nations High Commissioner for Human Rights (OHCHR) and the Inter-American Commission on Human Rights (IACHR) have also urged the State of Honduras to comply with its obligation to ensure that attacks on HRDs are investigated promptly, thoroughly, independently, and impartially and that the perpetrators are brought to justice and duly punished in accordance with the gravity of the offense, as the Committee on Human Rights recommended in its observations on Honduras in July 2017.

On 31 October 2017, the International Advisory Group of Experts released its report on the killing of human rights defender Berta Cáceres and the Honduran State’s investigation. The report raises troubling questions about the ability of victims to participate in the process, as well as about the conduct of the official investigation and its effectiveness in identifying and prosecuting everyone involved in Berta Cáceres’ murder, including the masterminds. The killing of Berta Cáceres constitutes an emblematic example of the context of harassment and intimidation in which HRDs undertake their work in Honduras. Effectively investigating the murder of Berta Cáceres and punishing those responsible would set an important precedent to prevent these types of attacks from happening again.

The use of legislation to criminalise HRD’s

There has been an increase in the introduction and use of legislation to criminalise and intimidate social activists and lawyers in Honduras.

In February 2017, for example, the country’s congress approved a new penal code making it a criminal offence for individuals or media outlets to engage in the: “apology, glorification, [or] justification” of terrorism. The new legislation also defines as terrorist offences: any form of “illegal association” and acts “causing fear, putting in grave risk, or systematically and indiscriminately affecting the fundamental rights of the population or a part of it, the internal security of the State or the economic stability of the country”. Unfortunately, this legislation is being applied to groups that are opposed to the government and/or are exercising their right to protest. In addition, the Inter-American Commission for Human Rights and the Office of the UN High Commissioner for Human Rights have also expressed their concern about the ambiguous formulation of the law and its potential to arbitrarily restrict freedom of expression and of the press.

What the Law Society has done

The Law Society has been monitoring the situation in Honduras, has sent several intervention letters on behalf of lawyers and HRDs, and has held several events to update our members. The Law Society has intervened on several instances on behalf of lawyers and HRDs in Honduras including on the cases of the murder of HRD Berta Caceres and Judge Mireya Mendoza Pena. For more information, please refer to our page on intervention letters.