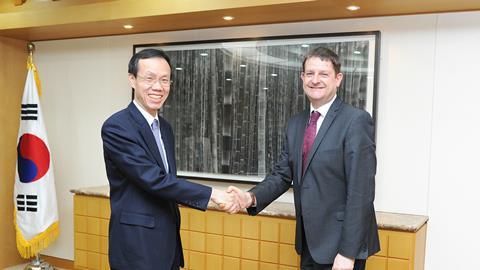 The gradual liberalisation of the Korean legal services market under the EU-Korea Free Trade Agreement is boosting potential investment. South Korean corporations are increasingly expanding abroad. Today, there are some 200 Korean companies in the UK - including 15 listed on the London Stock Exchange - using English and Welsh law for business contracts. Now is a good time for English and Welsh firms to be thinking about South Korea.

To capitalise on this momentum for solicitors and further promote the use of English and Welsh law in South Korea, the Law Society of England and Wales teamed up with the British Embassy, UKTI and the Korean Bar Association to organise a presidential legal market visit to Seoul, from Monday 26 to Thursday 29 January 2015.

The four-day visit included high-level meetings with the South Korean Minister for Justice, the South Korean Opposition party and the British Ambassador to South Korea, as well as Supreme Court judges and the President of the Korean Bar Association. Speaking to important stakeholders on behalf of the English and Welsh solicitor profession, Andrew Caplen stressed the importance of further legal market liberalisation.

“The English Law Day was very helpful in furthering my understanding of being an English solicitor in practice. It also helped me to better understand the importance of English law, particularly in relation to my practice area, maritime law - in which Korean parties play a veryimportant and active role. After my presentation on re-qualifying as an English solicitor, it was truly rewarding and a pleasure to observe the high level of interest from Korean lawyers who expressed interest in taking the QLTS. All in all, the English Law day was excellent, as we found it very useful to share thoughts from both English and Korean perspectives.”

Delighted with how the visit went, Law Society of England and Wales president Andrew Caplen explained: “The UK is already South Korea’s second largest European trading partner. Well over half of South Korea’s investment in the EU is in the UK and further growth is expected. That is why I was there with colleagues; promoting our members and the law of England and Wales.

“The Free Trade Agreement is estimated to be worth over £500 million to UK business each year and South Korea is a designated high growth market for UK exports. UK goods exports to Korea have increased year on year since 2009. Taken together there are many opportunities for solicitors to service this growing trade relationship with South Korea.”

The Law Society would like to thank the Korean Bar Association, UKTI and the British Embassy for contributing to the success of the programme.