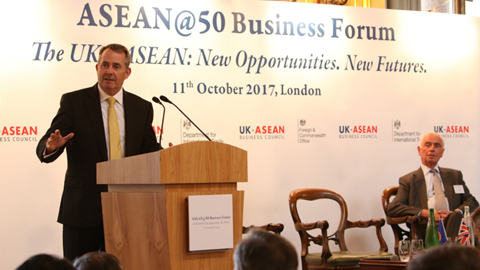 What's next for the UK-ASEAN relationship?

Addressing an audience of ten ASEAN Ambassadors and all three UK Trade Envoys to ASEAN, the Secretary of State said ASEAN was “poised to become an economic powerhouse of the 21st century”. He advocated increased trade between the UK and ASEAN countries because “trade is a tool to increase prosperity. Prosperity underpins social cohesion, and social cohesion is necessary for political stability”, he commented.

The Department for International Trade is focusing on market access for UK companies in ASEAN countries post-Brexit. The Secretary of State said the department is working on a “transitional adoption” process to ensure any EU trade agreements with ASEAN countries are replicated in UK law before Brexit, to guarantee ASEAN companies continued market access.

Later in the forum, Moazzam Malik, British Ambassador to Indonesia, ASEAN and Timor-Leste took questions from the audience. He said the UK was seriously considering joining an Asian trading relationship, but had not decided which one. He reiterated the Secretary of State’s message that HM government desires to transition all EU trade agreements with ASEAN countries into bilateral agreements with the UK. ASEAN is already the UK’s fourth biggest trading partner, but the Ambassador asserted that Department for International Trade is increasing the level of attention it pays to the region.

ASEAN celebrates its 50th anniversary in 2017.

For more information on our work in ASEAN email asia@lawsociety.org.uk.