Day two’s keynote address was on “Tomorrow’s world and the in-house lawyer”, delivered by Sharon Blackman, director and deputy GC of global bank Citi, in conversation with Stephen Denyer of the Law Society. Sharon pointed out how “self-made luck” can play a part in career success, such as when a chance contact led to her finding a new role in derivatives. She advocates using general networks, not just legal networks, and believes that anything is possible if you are willing to invest in yourself and the organisation is willing to invest in you. She sees creating a bridge between IT and legal as a key skill for the future, as is project management. 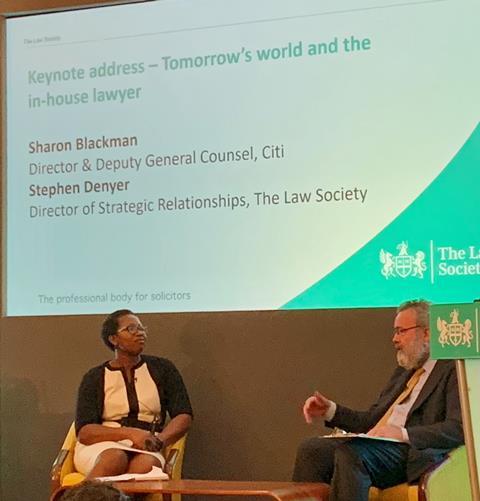 The morning breakout session I chose was “Work-life balance– what does it mean and how do you achieve it?”. It was led by Francis Nash of DWP and Liam Sheridan of HM Revenue & Customs. It gave rise to a lively debate on what exactly was a work-life balance and the challenges that can lead from it – for example, one person’s ‘balance’ may indirectly burden that of someone else’s in the team. It was acknowledged that sometimes work just has to come first. Liam referred to a 2019 resilience and well-being survey, in which 93% of those questioned felt stressed and 34.5% had suffered physical ill-health due to work-related stress. It is becoming increasingly clear that in attracting new legal talent, the prospect of better work-life balance has begun to play a large part.

The afternoon began with “How to develop and run a legal operations function”, chaired by I. Stephanie Boyce of Stephanie Boyce Consulting (and soon to be elected deputy vice-president of the Law Society), with speakers Max Hubner of DPA Professionals, Vicky Locke, consultant GC, Maria Passemard of the John Lewis Partnership and Jo Rogers, founder and CEO of NaviStar Legal.

Maria stressed the importance of first identifying what an organisation hopes to achieve through its legal operations, which might link to its mission statement, and then looking at how lawyers are deployed in that, so they are not working on matters that are too low-risk. The panel discussed what they regarded as their biggest mistakes, emphasising the need for discipline and accountability. Being unrealistic on the time required to complete tasks can often be our downfall. With change management, it was agreed that you have to bring your people with you and make time to manage the change.

It was observed that private practice might reward practitioners for hours worked, but in-house lawyers need to be efficient – not necessarily insanely busy. Going home at 5pm can actually indicate someone is doing their job very well – ‘busyness’ in itself should not necessarily be equated with efficiency.

The final breakout session I attended was “Spend management / demonstrating value”. After all, is this not a constant pressure in all our jobs? This was chaired by Amanda Gill of Deutsche Bank, with speakers Brad Duncan from the Children’s Investment Fund Foundation and Mark Maurice-Jones of Nestlé. Brad advised on knowing in detail how much is spent and where, and that legal spend management review should be seen as a process, rather than just a legal spend review, and how risk assessment should become a frequent part of this. He said that fixed fees could be useful for types of contracts, together with regular fixed retainers for general queries, but felt that capped fees were becoming less popular, due to the limited scope of advice given. Alternative arrangements might also be considered, for example success fee arrangements if a matter completes. Most firms will now provide for active cost management through their online portals.

The conference ended on the joyful note of “Crisis management – how to prepare and implement a strategy” – probably one of the most useful and ultimately reassuring sessions. This was chaired by Emma Woollcott from Mishcon de Reya, with speakers Felix R Ehrat of Novartis, Uma Mehta CBE of Islington Council and Jonathan Ollivent of Uber.

Felix felt you should distinguish between situations which you could see and reasonably prepare for, such as hacking where cybersecurity would be key, and unpredictable situations where you will need to set guidelines on dealing with the unexpected. He recommended reading Thirteen Days by Robert Kennedy on the Cuban missile crisis, as a great lesson on crisis management. (Let’s hope we never face anything quite of that magnitude in our jobs!.)

Uma had faced critical challenges following heavy cuts in public spending, so from her perspective preparing for eventualities means in effect taking into account that there will be little resource available. She felt that a “blame culture” could make things worse, and instead advocated a culture of honesty to encourage disclosure before things get out of hand.

Jonathan was all too aware that Uber was now the “naughty poster boy” in the debate around employment rights. He leads a young legal team who have to be nimble and responsive in their advice, particularly on dealing with adverse press. Felix ended on a more positive note, pointing out that a crisis can be a good learning experience – but we have to remember that the time after the last crisis is always the time before the next!