The Law Society participated in the 5th Colombian Caravana 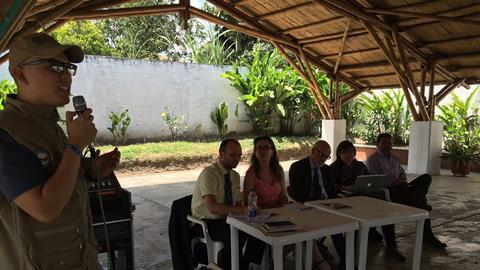 It is estimated that between January and August 2016 up to 35 human rights defenders were killed in Colombia according to statistics provided by the Colombian NGO Somos Defensores and the field office of the UN Office of the High Commissioner for Human Rights (OHCHR).

Following the aims of the Law Society’s Lawyers at Risk programme, the Law Society participated in the fifth Colombian Caravana UK Lawyers Group (“Caravana”) with the objective of assessing the situation of lawyers in the country and identifying trends in the obstacles that they are faced with. The Caravana is an international group of lawyers that gathers information, monitors, and raises awareness of threats and attacks against legal professionals in Colombia. It was incorporated as a foundation in 2010 and received its charity status in 2011. Sara Chandler, a member of the Law Society’s Human Rights Committee, is the Caravana’s founder and former Director and Sue Willman (also a member of the Law Society’s Human Rights Committee) is its current Director. Previous visits of the Colombian Caravana took place in 2010, 2012 and 2014. This year, 55 delegates participated from 15 countries and included Latin American representatives from Honduras and Argentina. Although most of these delegates were lawyers - solicitors and barristers - the delegation also included one prosecutor and three judges.

The Caravana visited 7 regions (Bucaramanga, Cali, Cartagena, Medellin, Tumaco, Barranquilla, and Cucuta) and met with lawyers, human rights defenders and victims of the internal armed conflict. In Bogota, the Caravana met with State representatives and NGOs. In the course of the Caravana’s visit, after more than 50 years of armed conflict, the Colombian state signed a peace agreement with the leftist guerrilla group FARC. Most Colombian lawyers and defenders were cautiously optimistic. However, there was also a lot of fear of a potential backlash and of paramilitary groups filling the vacuum left by the FARC. It is expected that attacks on lawyers and human rights defenders will continue during the implementation of the peace agreement and may even intensify.

The Law Society met with the British Embassy in Bogota, lawyers, academics and NGOs to explore possibilities for collaboration. We will continue to monitor the situation in Colombia and intend to contribute to the professional training of lawyers in Colombia, as well as cooperate with local NGOs to provide training on protection mechanisms for human rights defenders.

The report of the Caravana will be launched at the Law Society on 18 November 2016. Details for registration will be published here shortly.