Jorge Molano is a lawyer working with DhColombia, an organisation that legally represents victims of human rights violations, especially extrajudicial killings and displacement. Mr Molano spoke about the serious obstacles facing human rights lawyers and human rights defenders since the (amended) peace agreement, signed by the Colombian Government and the guerilla group FARC, was adopted by Congress at the end of last year. 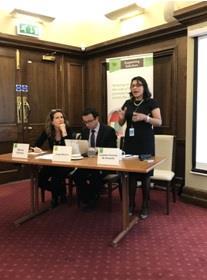 There had been an increase in attacks against human rights defenders and also an increase in the criminalisation of civil protest. There remained impunity for the perpetrators of such attacks. Mr. Molano reported that there seems to be a pattern that only the material perpetrators of the crime are prosecuted, but that no action is taken against those who planned the commission of these crimes.

Molano explained that the peace agreement now needs to be implemented. However, of the many laws that need to be adopted by the Colombian Congress for such purposes, only very few have in fact been passed. This means that it may take a long time for justice to be achieved in the country. The peace agreement focuses on four important elements, which are essential for attaining peace: truth, justice, reparation, and guarantees of non-repetition. However, previous experiences, such as the ‘ demobilization’ of paramilitaries under the Justice and Peace Law, have shown that 99.8% of cases against paramilitaries ended without a conviction and such cases remain in impunityand that only 0.3% of hectares of land were returned from paramilitaries to victims as reparation. 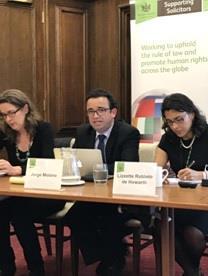 The peace agreement provides for the setting up of the Special Jurisdiction for Peace (SJP), which includes a truth commission, the formation of a group to search for the disappeared, a unit for the investigation of crimes, and the creation of a tribunal, made up of first instance and appeal courts. So far, only the Secretariat of the SJP has been established. The judges of the SJP have not been appointed.

One of the main concerns of the SJP, as expressed by Mr. Molano, is thatthe perpetrators of crimes can voluntarily decide whether to submit themselves to the SJP or not. There is also a possibility that the SJP may be used by some to challenge convictions that have already been rendered by other tribunals.

Mr. Molano considers that the role of the Law Society and other international organisations is essential to continue supporting the role of human rights lawyers and defenders in Colombia. He stated that the Truth Commission that will form part of the SJP can only function if all relevant information and materials are available, which at the moment seems doubtful. Countries like the US, the UK and Israel, that have previously participated in the establishment the intelligence services in Colombia, should declassify relevant information and make it available, so that it can be used to seek justice. Organisations in these countries can help to pressure their respective Governments to release that information. Mr. Molano explained that monitoring the situation of Colombian human rights lawyers and defenders is paramount to ensure their safety. He also confirmed the importance of diplomatic representation at trial observations, as well as interventions in domestic proceedings through amicus briefs. These constitute essential tools to obtain respect for human rights standards and supports the successful use of existing international and regional mechanisms by victims of human rights violations. 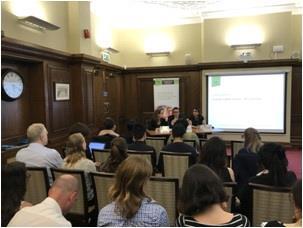 During the Q&A, the debate around the possibility of having both justice and peace was raised. According to Mr. Molano, peace needs an element of justice in order to be authentic. He added that in a situation like the one in Colombia, of transition from conflict to peace, society needs an element of truth. Sometimes it is only justice or legal proceedings that can provide such truth.