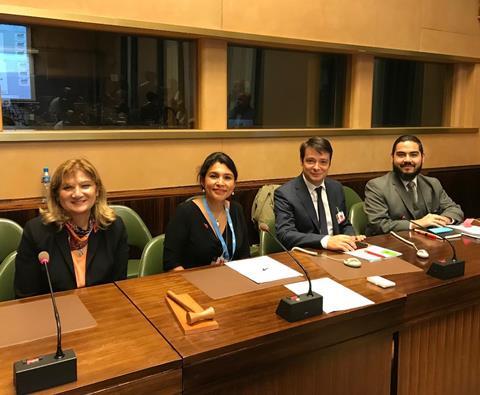 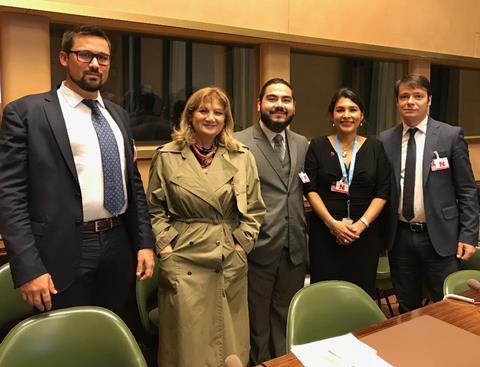 On 7 November 2018, the Law Society and Transparency International organised a side event to highlight the role of lawyers and judges in tackling corruption to help build peace in a turbulent world. Over 30 people attended this event including representatives from the German Permanent Mission, the University of Geneva, the International Developmenmt Law Organisation, the United Nations Association, the International Catholic Migration Commission, adn the Global Fund to Fight Aids.

From their different perspectives, the speakers explored what impact the establishment of a robust and independent judiciary and independent legal professional can have on peacebuilding, which included sharing best practices and models to prevent violent conflicts.

Lizzette Robleto de Howarth began by outlining that corruption has placed many lawyers and human rights defenders at risk of being targeted with intimidation, harassment, and even murder. This is a serious cause for concern across the globe as corruption fuels and perpetuates the inequalities and discontent that lead to fragility, violent extremism, and conflict. In this context, corruption in the justice system - whether actual or perceived - is a real threat to public confidence in the rule of law.

Professor Alistar underscored that corruption should be considered a threat to society, which requires long term and sustaiable solutions. He also stated that it is important to consider whether countries are in conflict or post-conflict, so as to adjust potential solutions by carefully assessing how robst and effect the legal framework, the judiciary, and the enforcement agencies are in thos jurisdictions. He intimated that we need to identify the substantive gaps in legislation as a way of addressing corruption, bhut we must also bring together other stakeholders to collectively find the answers.

Jean-René Oettli presented an overview of the Swiss legislation which, under pressure from the international community, has evolved over time. The previous legislation had clear limitations in the way it tackled corruption - as illustrated by the federal ruling in the Gazprom case. However, corruption has come under greater public scrutiny and increasing demand for accountability, especially considering recent domestic changes. The enforcement of international criminal law shows that, even in Switzerland, the independence of the judiciary can be compromised when international interests are at stake.

Dr Leila Alieva emphasised that in the former Soviet Union jurisdictions the absence of a mature state is driving corruption and patronage, which is forcing other state bodies to be subservient to the executive. Having an independent judiciary is a novelty, she said, given that many of these nations do not fully recognise the concept of “judicial independence”, and their authoritarian regimes are inconsistent with the concept of independence. Dr Alieva underscored, that although criminal and civil law had been amended in compliance with UN standards, in Azerbaijan for example, the legislation is now being used to harass opposition leaders and NGOs.

Alfredo Ortega put forward the work of the UN Commission against Impunity in Guatemala (CICIG) as an innovative hybrid model that tackles corruption in a post-conflict society that has deep inequalities and a violent historical past. Alfredo stated that, in a society with corrupt politicians and a self-serving elite, tackling organised crime was an enormous task for judicial instiutions that are weak, under-resourced, and with a lack of an appropriate legislative framework. The fact that the CICIG is an institution created by a treaty and operating direclty within the domesic framelwork, facilitates legal reforms and motivates other institutions, such as the Constitutional Court and the High Risks Tribunals, to continue doing their job in the certainty that an international instution is further supporting their work.

All the speakers concurred that globalised corruption is a complex problem, which will not be solved with domestic solutions alone. This is why transparency and the anti-corruption agenda are becoming increasingly prominent at international level - it is important to put in place the necessary accountability mechanisms, including institutional processes and incentives to prevent corruption from occuring in the first place.

There is no magic bullet to tackle corruption and, in this context, active citizen participation continues to be a strong tool to deliver change. As global citizens, we have a responsibility to actively campaign and continue putting pressure on policy and decision makers to ensure that existing anti-corruption frameworks are in place and properly enforced. It is only through this active involvement that we will start making a diffence, and in turn support those operating in difficult jurisdictions to remain safe.

The Law Society is very grateful to Transparency International for co-hosting this event and to the Geneva Bar Human Rights Commission for their support. We also acknowledge the valuable work of the Geneva Peace Week organisers for giving the opportunity to generate a meaningful debate on our chosen theme.