Lizzette Robleto de Howarth met Bertha Oliva in 2015 as a result of her work on international development, women’s rights and human rights in Central America. In order to raise awareness on the challenges and obstacles faced by lawyers and human rights defenders in Honduras, Bertha kindly agreed to share her experiences with The Law Society to mark the Day of the Endangered Lawyers, which this year focuses on Honduras. 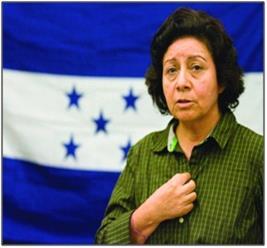 In 1982, Bertha Oliva de Nativí founded the “Committee of Relatives of the Disappeared in Honduras” (in Spanish - COFADEH) following her husband’s, Tomás Nativí Galvez, kidnapping and disappearance on 11 June 1981. Tomás was a 33-year old professor and a trade union leader. At the time of his disappearance Bertha was 25 years old, had been married for only four months and was pregnant with their first child. Tomás Nativí is one of 180 officially identified as “disappeared”.

Bertha has been awarded the “Human Rights Award” from the Honduran National Commission on Human Rights, the “Human Rights Tulip” by the Dutch government, and was nominated along with five other Honduran women as one of the 1000 Peace Women for the Nobel Prize in 2005.

1. A little about COFADEH’s work

COFADEH is a Honduran NGO whose fundamental aim is: to fight against all forms of impunity, to preserve historical memory and to prevent ‘silence’ being a shield for those responsible of committing heinous crimes. COFADEH is unique not just because of the content of its work, but it is also the only organization that works on enforced disappearances in Honduras. Since its inception COFADEH has been led by Honduran women and even today includes the daughters and younger sisters of the disappeared.

COFADEH has carried out litigation before international human rights tribunals, including the Inter-American Court of Human Rights (IACHR), where many international lawyers and international organisations have directly worked alongside and supported them. COFADEH has also provided evidence to the Inter-American Commission on Human Rights and the many Special Rapporteurs that have visited Honduras. They have ample experience in showcasing serious violations of fundamental rights and freedoms, especially on the right to life, integrity, liberty, security, due process, the right to a fair trial, freedom of expression, the right to privacy and judicial protection.

2. What is the situation of lawyers in Honduras and the main obstacles and dangers they face?

Honduras is a very deplorable case illustrated by the deterioration of the rule of law and the human rights abuses in the aftermath of the coup of June 28, 2009, which is a source of deep concern for many lawyers, responsible citizens and human rights defenders. After 2009, some judges were arbitrarily dismissed from their jobs for expressing themselves against the coup and as a result of their stance in protecting democracy and human rights. To date, the Honduran state insists that these judges were dismissed for their involvement in so-called ‘political party’ activities!

Another increasing concern is the blatant interference with the judicial system by other government branches, which is seriously undermining judicial independence. In December 2012, the Honduran Congress capriciously dismissed four Supreme Court judges after they rejected a plan by the executive to reform the national police. In January 2013, two of the fifteen judges of the Supreme Court, who voted against the ratification of the dismissal of their colleagues, were subjected to retaliation through arbitrary rotations. In total, it has been reported that 76 judicial officials and employees have been dismissed from their posts.

One of the predominant features is the widespread impunity, especially in cases where the practice of law enters into direct collision with the interests of the Honduran state and/or where the state is seeking to limit liberties and freedoms. COFADEH has found that, from 2010 to date, 81 lawyers have been killed and 9 of these were prosecutors. The Honduran state has disregarded many of these murders alleging that they [the lawyers] have been killed because of their involvement in drug trafficking or other illegal activities. These justifications have become a recurrent excuse for the inability or unwillingness of the state to investigate, to prosecute and to punish the perpetrators. Added to this, prosecutors and the police have waited for days before attending the scenes of violent crimes and have failed to carry out thorough evidence gathering, which in turn exposes serious flaws in the processing of forensic information. Apart from these failures, the problem with the administration of justice is that it is very slow, highly bureaucratic and therefore unnecessarily prolongs the judicial process.

Many lawyers have been subjected to direct threats as a result of their profession - the murder of the Honduran human rights lawyer, Antonio Trejo Cabrera, in September 2012 is a clear example. Cabrera had reported receiving death threats as a result of his work with Honduran peasants on the complex land dispute in Bajo Aguan. COFADEH also investigated the assassination of Dionisius Diaz in December 2006, a labour rights lawyer working for Association for a Fairer Society (in Spanish - ASJ) on the rights of vulnerable workers. This harassment and victimisation does not only extend to human rights lawyers but also to public defenders throughout the country.

As a seeker of justice, I can testify that one of the biggest obstacles in Honduras is access to justice. We are absolutely defenceless if the Honduran state does not commit to justice and human rights by taking genuine actions through the implementation of fair public policies. Unfortunately, we have no choice but to try and implement, as a matter of priority, protective measures in order to guarantee the lives of human rights defenders and lawyers who are facing imminent risks and even death as a result of their work. However, this preventative strategy can only be carried out through an effective and comprehensive plan, which includes having a dedicated team and the technical resources available to give fast and effective relief to the victims.

It is essential that the mandate of security personnel (e.g. the police, the army, etc.) should include operating in an inclusive manner, which ensures the participation and endorsement of communities so as to generate confidence and trust. It is also vital to provide [financial and human] resources that strengthen and build the capacity of all the components of the judiciary in order to respond to the needs of the Honduran population.

The Honduran state should remove any courts of national jurisdiction located within military installations, so as to ensure that there is a clear division between the institutions of the state and the army. This would allow the officials of these national courts to carry out their duties with independence and impartiality.

4. How can international lawyers help to support Honduran lawyers?

We need all the solidarity that we can muster - this could include delegations visiting the country who can help to research, systematise and report on the situation of lawyers, the judiciary and the rule of law. These reports can help to share the challenges of everyday life in Honduras and put pressure on the Honduran government to seek appropriate solutions to the multiple problems of poverty, public policies and the over-exploitation of natural resources. International lawyers can stand in solidarity by establishing linkages that increase the visibility of an issue (e.g. urgent actions).

As I stated before, it is essential to build the capacity of the Honduran judiciary so that it becomes responsive to the needs of the Honduran population. This capacity building can include organising training seminars in Honduras with legal practitioners, civil society organisations and the government to develop awareness on human rights, democracy and the rule of law.

Finally, we should be more vigilant in ensuring that gross human rights violations do not go unpunished, which in turn will create a pervasive cycle of impunity.

(8) “Honduras - Battalion 316: Torture and Forced Disappearances” The Centre for Justice and Accountability http://www.cja.org/article.php?list=type&type=254

(13) Manuel, A & Vivanco, J (1994) “The Facts Speak for Themselves: The Preliminary Report of the National Commissioner for the Protection of Human Rights in Honduras” Human Rights Watch/CEJIL http://www.cja.org/downloads/Honduras_Report_%22The_Facts_Speak_for_Themselves%22.pdf

(15) “The are no investigations here: Impunity for Killings and other Abuses in Bajo Aguan” (2014) Human Rights Watch