Lyndell Beguinua is legal counsel of one of the world’s leading technology companies – but, unbelievably, it took him over 10 years to qualify. He shares his remarkable – and at times tough – journey.

‘Focus on where you want to be, and go for it!’ was my mother’s advice to me as a teenager.

Experiencing financial struggles growing up, in spite of my mother’s best efforts as a single parent of two, instilled a drive in me to achieve a rewarding career. With the impending completion of my GCSEs, I met with my school’s careers adviser for guidance on next steps. I was encouraged to take up a new general national vocational qualification (GNVQ) in business studies at college, as opposed to the traditional A-level route. The course was interesting, and having particularly enjoyed the law module, I decided a career in commercial law was the way to go. 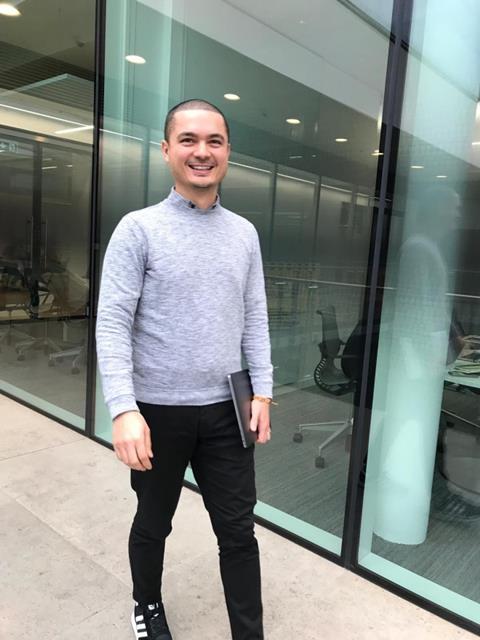 Full of excitement and ambition, I set my goals to becoming a solicitor.

Despite strong grades, I was disheartened that the vast majority of universities in the UK did not recognise GNVQs, which meant my university options were limited. It was a setback, but I decided I would focus on doing well in my degree. I opted for a local university so that I could live at home and reduce expenses.

I could not get a training contract, despite many applications.

I realised that because I followed a less traditional academic route and studied at a non-Russell Group university, securing a training contract would be a challenge. I had to think creatively. If what and where I studied were barriers, then I should acquire hands-on experience to show that I could still do the job. I volunteered at courts, charities and firms in the evenings and semester breaks and attended as many networking events as I could, all while completing training contract applications and studying. I left university with a healthy 2:1 and a broad range of legal work experience, but still no training contract.

By the time I completed the legal practice course, I was faced with the harsh reality of needing to earn money. Holding off training contract applications, I started to apply for paralegal positions. I felt it would be a great way to further develop my legal work experience and have an income. I was surprised that paralegal positions were almost as competitive as training contracts, with similar requirements by way of grades and universities.

So again, I had to think creatively.

I secured a temporary filing administrator role in a top City law firm. Whilst it was not a training contract or paralegal role, it was a foot in the door. I spent my time mostly packing boxes for an office move, but I worked hard to make an impression. I came into the office every day in a suit and tie with a nearly-empty leather briefcase, and spoke to as many people as possible. It got me noticed: I was informed of a paralegal vacancy, applied and got the job.

This was the start of my 10-year paralegal journey at various firms. I continued to apply for training contracts, used my annual leave to complete work placements at other firms and attended networking events. Unfortunately, despite deeper legal work experience, I still had no training contract.

It became clear to me that traditionally-minded law firms were not ready for non-traditional candidates.

I decided to move in-house and applied for a paralegal role at a leading American global technology company. To be honest, I was not confident I would get the job or even be invited for an interview (it was an incredible company), but thought it would be worth the shot. Some two months later, I was very surprised to receive an email inviting me for a phone interview.

Following the phone interview, I attended a further nine interviews over a three-month period, meeting different people each time, which finally culminated into an offer! I was given feedback that the team were impressed by my wide experience and passion. Again, it was not a training contract, but I was in.

I was very happy in my role. In fact, it was the best job I had ever had. The company was progressive, the work exciting and the culture inclusive and diverse.

I focused on working hard.

Getting the training contract

A year into my role, I received great feedback on my performance. I decided to propose the idea of training in-house to the leadership team. As an American company, the team were unaccustomed with the qualification process in the UK, and it was not something it offered. So I set out a clear business case, explaining the qualification process and why it would benefit the company to support it. I had already sourced approval from other internal legal teams to complete seats with them. To my absolute joy, they said yes! It was a very surreal moment, and prompted a large steak and wine at a posh restaurant.

The company was registered with the SRA as a training provider, the training contract formalised, and it was full steam ahead.

There were moments I thought it would never happen.

The perpetual rejection over a long period of time took its toll. However, I knew if I remained focused and consistent in my approach, my break would come. To aspiring solicitors who can relate to my journey, my advice would be not to let your differences hold you back. Persevere, think creatively and seek out opportunities to develop your knowledge and experience. It will demonstrate your commitment to a career in law, and bolster your applications and interviews. You will also need a generous dose of grit! You never know what is around the corner. I was once in your shoes, but now write this article as a legal counsel of one of the world’s leading technology companies. My mother is very proud!