New opportunities for doing legal business in the Philippines

Certainty matters. And a wave of reforms planned for the Philippines is looking at increasing just that. 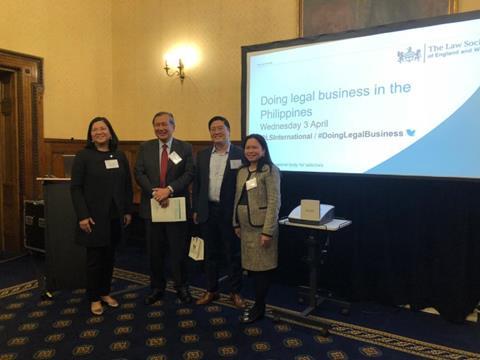 The Philippines is the third largest English-speaking country in the world and one of the fastest growing economies in Southeast Asia.

On 3 April 2019, our panel of experts discussed the economy, political and legal system; legal and regulatory framework; and current business opportunities in the Philippines – outlining a number of new initiatives aimed at facilitating trade and investment between the UK and the region.

Attention was drawn to four new initiatives on the horizon: the Ease of doing Business Law; the Foreign Investment Negative List; the New Corporation Code; and the Bangsamoro Organic Law.

The Ease of Doing Business Law , passed in late October and expected to be implemented this year, aims to cut down red tape and make the process of setting up and running businesses in the Philippines easier.

Similarly, the new Foreign Investment Negative List , signed this year, will expand the areas open to foreign investment. It permits 100% foreign ownership in several new areas such as internet businesses and higher education.

Finally, the recent Bangsamoro Organic Law has the potential to create huge change in the Philippines. The law provides for new autonomous region with its own parliament, greater federal funding, and full control of the area’s natural resources - previously shared with the national government. It has been suggested that this provides an opportunity for a Bangsamoro freeport zone to be carved out in Southern Philippines.

While the Philippines is not yet open to foreign lawyers, there are suggestions that this is also on the cards .

These initiatives are a step in the right direction, but the Philippines still has a way to go in implementing them and building the required infrastructure. This liberalised outlook, coupled with strong GDP growth rates and membership to the Association of Southeast Asian Nations (ASEAN), makes the Philippines a country to watch.

The Law Society’s international department is the international voice of the England and Welsh legal profession, promoting our members’ expertise and business internationally. Through relationships with our overseas counterparts, we advise on market access requirements and regulations and connect local lawyers looking to work with solicitors overseas. For more information, contact us at asia@lawsociety.org.uk or check out our Doing Legal Business in the Philippines Guide.