Developments in the ASEAN: our VP visits Cambodia and Thailand

Economic power is shifting East, and likely to continue to do so. In addition to China and India, the strong growth of other Asian economies – including those in the Association of Southeast Asian Nations (ASEAN) – is beginning to draw attention. 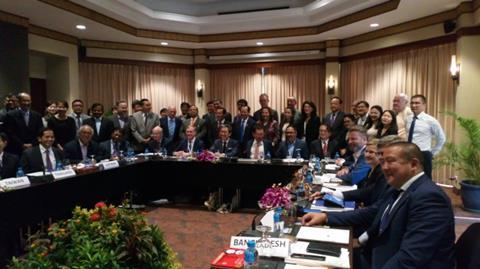 ASEAN today (Brunei, Cambodia, Indonesia, Laos, Malaysia, Myanmar, the Philippines, Singapore, Thailand, and Vietnam) boasts the world’s third-largest labour force. It is home to over 600 million people, larger than the European Union or North America. Its GDP is over $2.4tn, surpassing economies such as the UK, France, and India, and is expected to continue to grow at increasingly high rates. In 2016, nearly 25,000 UK businesses exported to ASEAN, making it the UK’s second-largest global export destination after the United States.

And the labour force in ASEAN has more to offer - with more than half of its population under 30 years’ old. In the legal sector, for example, one third of The Vietnam Bar Federation’s membership alone is under 30 years’ of age.

Cambodia is one of the fastest-growing economies in the region. Since its emergence from civil war, Cambodia has actively sought economic recovery and to integrate itself into the world community. It joined the WTO in 2004 and is open to foreign investment. Our Vice President met with DIT Cambodia, Cambodian and foreign law firms, the national bar association – the Bar Association of the Kingdom of Cambodia (BAKC), and other ASEAN bar associations attending the LAWASIA conference to understand more about the local business climate.

Cambodia values foreign lawyers’ expertise. English and Welsh solicitors interested in working in Cambodia have the potential to become senior lawyers in some commercial areas by drawing on their education and experience in their home jurisdiction.

Foreign firms can practice in a joint-ventures with local firms, so long as a co-operative agreement is registered with BAKC. There is an interest in encouraging Cambodian law students to study overseas in the UK and to develop the skills of junior lawyers, as well as a growing demand for commercial law expertise. English is the language of business in Cambodia, which puts the UK at a further advantage.

Thailand’s ranking on the World Bank’s Ease of Doing Business index moved up 20 positions in 2018. Among the ASEAN members, Thailand is the UK’s second largest trading partner, accounting for 17.1% of the UK’s total trade in the region. In Thailand, we attended the IPBA-THAC Arbitration day, held a roundtable with international firms in Thailand, and met with the British Chambers of Commerce and the Lawyers Council of Thailand under Royal Patronage.

Thai lawyers are making efforts to become a greater part of the global legal community and serve their clients in international matters. The IPBA-THAC Arbitration day was a two-day regional conference on arbitration. The Permanent Secretary to the Thai Ministry of Justice told the audience that the Thai Government was supportive of arbitration in Thailand and is amending the arbitration act to clarify the difference between a domestic and an international arbitration. The Thai Government is also proposing to introduce a smart visa scheme for THAC-endorsed foreign arbitrators to simplify and expediate work permit applications.  Meanwhile, the Lawyers Council under Royal Patronage is running training courses to increase English proficiency in its membership.

What does a growing ASEAN mean for our members?

Across all our meetings held during the visit, the message was clear. ASEAN is an area to watch.

“A large amount of work undertaken by lawyers in ASEAN countries is across border. And this will continue to increase as the ASEAN economies and trade links between and beyond the bloc grow.”

ASEAN-related commercial contracts and dispute settlements often rely on English and Welsh law[1] as it is clear, transparent and flexible. Based on the principle of freedom of contract, English and Welsh law allows businesses and individuals to tailor agreements to fit their specific needs. ASEAN lawyers need to be familiar with common law to advise and protect their clients as a result.

In addition, the young demographic and growing middle class in the ASEAN has led an increase in highly-educated entrants to the legal profession, many having been educated in the UK.

“There is an opportunity for the Law Society of England and Wales and its members to engage with junior ASEAN lawyers and law students about the benefits of learning about English law and the solicitor qualification, and for UK universities to collaborate with ASEAN organisations in the legal education field” said Vice President Simon Davis.

The Law Society of England and Wales works to provide practical support, information and advice for firms working abroad, solicitors exploring opportunities overseas, and the promotion of the rule of law. We make regular trips to the Asia region, hold meetings with stakeholders, and run events. If you are interested in finding out more about our work in ASEAN, email us at asia@lawsociety.org.uk

[1] A survey of 500 commercial law practitioners and inhouse counsel conducted by the Singapore Academy of Law found that 48% of respondents identified English law as their preferred choice of governing law in contracts (TheCityUK 2016).